Ok so why haven't I updated this blog in two years?
Well the simple reason is Natasha has been in storage for two years.
How did that happen?
Well.......it's complicated.


In 2011 I happily moved to Northern Michigan for a new job.
My carrier and job skills have been in the film business for the past 15 years.
Mostly in the realm of doing 3d computer graphics for Films, TV and commercials.
My demo reel: https://vimeo.com/50303963
http://www.mash3d.com/Resume.html


My job in Northern Michigan I thought was going to be a long term gig. That's when I bought Natasha. Turns out it only lasted for 4 months before the work dried up. My boss told me to “hang on for a couple of weeks and something will come along”
Two weeks turned into a few months. In the mean time I had an apartment contract for a year that I was stuck with. I picked up a few odd jobs to keep me going but nothing major for several months.
Not having a lot of money I didn't to much with Natasha other than get around town.
About the same time my apartment contract was finally ending I got a job but it was in Los Angeles. I wasn't sure how long the L.A. job was going to go for and I didn't have a way of dragging the bike with me to L.A.
I was also under a deadline of A) having to get out of the apartment in a week and B) having to be in L.A. in 3 days for the new job. So I managed to find a local Motorcycle shop that would store my bike inside for $20 a month.
I thought “Ok it's only for a couple of months”. Needless to say that was an underestimation.
I managed to get the bike stored during a nice Michigan snow storm and took off for L.A.


The L.A. gig was a bit of a dogs breakfast. I discovered I was in over my head and at not really all that fond of working 70+ hours a week. Plus I was having a hard time keeping up with 20 year old kids amped up on Red Bull and Aderall.
After 3 months the show I was working on got canceled. At the same time all the work was leaving town and going to Vancouver or London. Pretty much everyone I knew in town was unemployed themselves.
That when I decided it was time to get out of the film industry.


That was easier said than done. I came back home to Tennessee and helped my sister finish building their house. I ended up renting their old house while trying to find a job. I found out that the more specialized you are the harder it is to change carriers. My resume reads like a Digital Migrant farm worker. The cooperate world does not like creative people that don't fit into nice neat boxes. Needless to say I had a very hard time finding any jobs at all. I finally got a job teaching part time at at a local art college.


All the while Natasha is still sitting in Michigan. Finding the time and money to go get the bike was my main problem. Not to mention I had a 1995 ford explorer with 275,000 miles on it and a very flaky transmission. Just when I had the time and money to go get the bike the transmission on the truck finally gave out. I managed to by a cheap car but that ate up most of my bike rescue funds. Shipping the bike was going to cost me at least $900. I finally managed to find someone to ship the bike for fairly cheap. Even though it did arrive in the middle of the night in a horse trailer, with a live horse no less.


Since the bike was stored inside it was in good shape. The left carburetor was full of green crud though.
I had to go through an thoroughly clean out both carbs a couple of times. I also replaced all the fuel hoses and cleaned out the tank and the petcock. Doing all of this convinced me that Ethanol is plot by tree huggers to kill all internal combustion engines.


After a week of fiddling around I manged to get the bike running OK. The left carb still backfires a little every once in a while and it really could use a new battery. Other than that Natasha isn't any the worse for wear.
So what are Natasha and me going to get into next? I have no idea.
I'm open to suggestions. 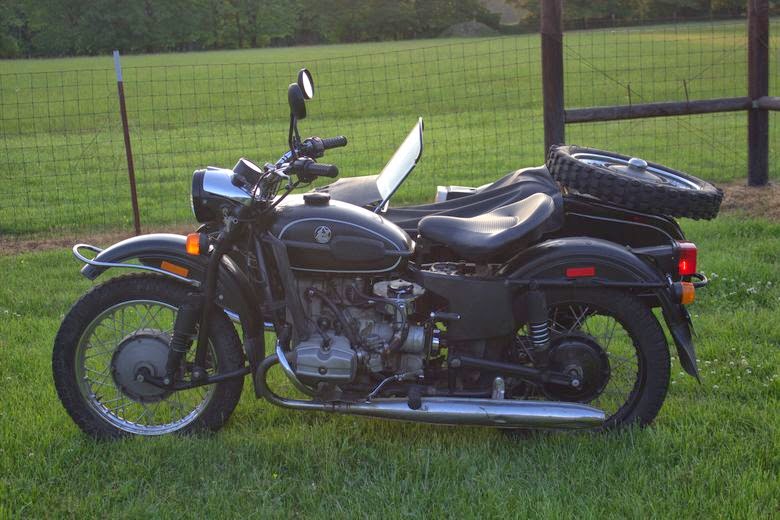